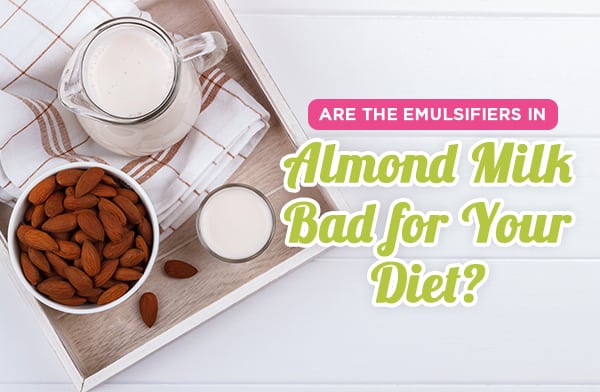 Almond milk was one of the first non-dairy milk alternatives, hitting the market not long after soy milk and long before many of the newer options like pea and cashew milks. Many people view it as a healthy alternative, but is that really the case? After all, it’s shelf-stable and doesn’t separate, which means there’s something going on chemically that might be worth investigating.

Emulsifiers are chemicals that cause or facilitate an emulsion.

Alright, that’s not really helpful. Let’s take a step back. What is an emulsion?

An emulsion is a mixture of two liquids that normally do not mix. The most common example is oil and water. If you try to mix oil and water together, they’ll separate very quickly. And yet, there are many food items that mix together water-based ingredients and oil- or fat-based ingredients. Salad dressings, mayonnaise, even just plain old butter is an emulsion. 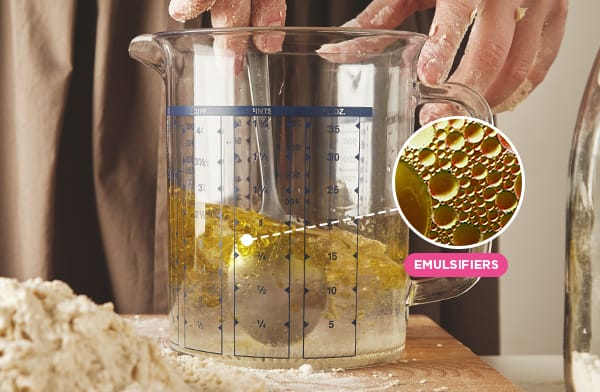 You can mix oil and water together if you stir it hard and fast enough. That’s how many vinaigrette salad dressings work, for example. After a few hours, they’ll separate back out, and you’ll need to shake them back up before you use them.

Some products are emulsions that don’t “break” or separate. In these cases, they’re called “permanent emulsions” and are made permanent with the use of an emulsifier.

An emulsifier is a specific chemical that allows oil and water mixtures to stay mixtures. That’s how almond milk can stay milk, shelf-stable, and doesn’t need more than a cursory shake before drinking.

It’s also why, if you want to make almond milk at home, most food blogs recommend adding an emulsifier.

Does Almond Milk Use Emulsifiers?

When we’re talking about oil and water, salad dressings, and mayo, it’s easy to think that something like almond milk isn’t going to need those kinds of chemicals. After all, almond milk isn’t full of fat and oil, is it? 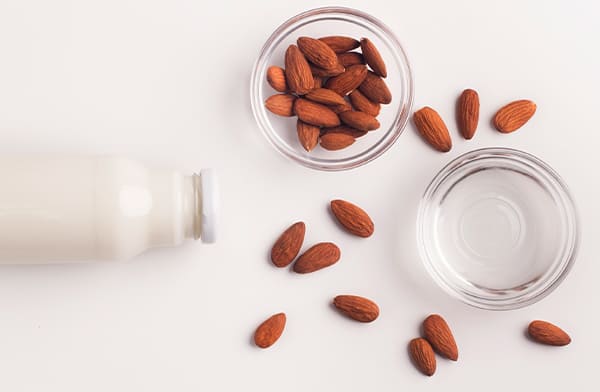 Well, actually, it kind of is. Almond milk is mostly water, and the percentage of it that is actually almond is typically protein and fat extracted from the almonds. And, of course, any time you have a liquid that mixes water and fat, it needs to be emulsified if it’s not going to separate. Nobody wants to drink separated almond milk, so companies manufacturing it will usually use an emulsifier.

What Emulsifiers are Used in Almond Milk?

There are quite a few ingredients that are used as emulsifiers. Do any of these ingredients sound familiar to you?

All of these are commonly found in foods of various kinds. Most often, they’re found in baked goods, sauces, beers, and various kinds of junk food.

Additionally, some more natural ingredients can be used as emulsifiers, including mustard, honey, and eggs. Eggs are, in fact, one of the most common emulsifiers… because they contain lecithin. Lecithin is also found in soy and sunflowers, which is why many products will use “soy lecithin” or “sunflower lecithin,” especially if they’re vegan products that avoid eggs.

Are Emulsifiers Bad for You?

This is a difficult question to answer. There are three potential factoids that can influence your perspective.

First up, emulsifiers like lecithin are extremely common food additives. Anything used as a certified and approved food additive has to be examined and tested by the Food and Drug Administration, and be verified to be more or less safe.

Now, the FDA has made mistakes before, and changing standards have meant that some previously-approved ingredients are found to be harmful. Also, it’s entirely possible that ingredients can act in ways we simply don’t understand or have the tests to measure, and as science advances, more information can be found.

So, FDA approval on its own isn’t a sure-fire guarantee that an ingredient is safe. On the other hand, the FDA is generally good about keeping truly harmful ingredients out of food. 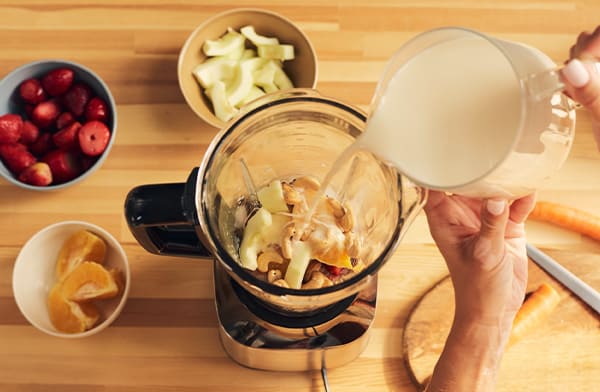 Secondly, some scientific studies have shown that lecithin, in particular, can have some beneficial effects on your overall health. According to an overview from Healthline, lecithin:

Also, lecithin is naturally occurring in your body. You can get more of it from your diet, but you can never fully purge it from your system, because your body produces it out of amino acids.

The third factor to consider is that there may be some questionable science and disconnect in opinions between food ingredient risk assessors and the scientific community. This paper, for example, presents some evidence that lecithin:

The truth is, there’s not actually a ton of definitive evidence in either direction. And, since bodies are complicated, it’s entirely possible that both are true! Lecithin might very well help your heart while hurting your gut.

Are Emulsifiers Bad for Your Diet?

Now let’s return to the original question; are emulsifiers in almond milk bad for your diet?

For this one, the answer is a lot simpler: nope. Emulsifiers don’t really affect your diet much, and if they do, it would be in a positive way. 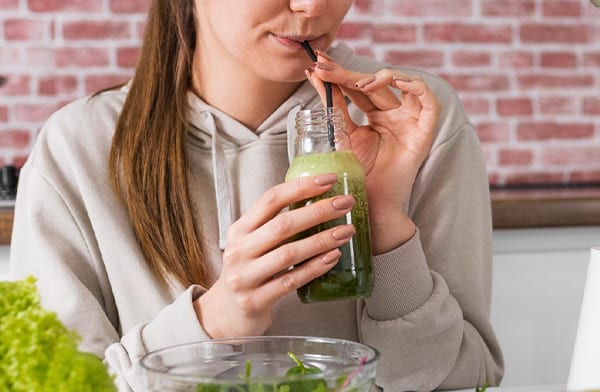 Emulsifiers aren’t really a large nutritional factor. The amount of emulsifier in a serving of almond milk is diminutive, much less than even a single calorie worth of nutrients. It’s also made up of amino acids, so it’s basically just a tiny amount of additional protein.

If anything, it’s possible that certain emulsifiers might help your diet. Soy lecithin specifically is relatively difficult for your body to break down and digest, and so it can help you feel slightly more full for slightly longer after consuming it. In other words, it has a very minor appetite suppressant effect. That means it can help you avoid snacking or eating too much.

Again, though, the amount of emulsifier in a serving of almond milk is basically negligible. There’s so little of it there that it’s hard to say that it has any tangible impact on your diet one way or the other. If anything, the benefit of switching from dairy milk to almond milk (or from a sweetened milk to an unsweetened milk) is going to be so much better that it would outweigh any detriment the emulsifier adds.

Do Emulsifiers Have Side Effects?

Emulsifiers, in general, are a very broad category. That said, they have one major potential side effect: allergic reactions.

The three biggest emulsifiers you commonly find in foods are egg-based, soy-based, and sunflower-based. Sunflower is the best, because it’s a seed, and very few people are allergic to something like sunflowers. It does exist, but it’s relatively rare compared to the others.

Egg allergies are more common, and soy allergies are even more common. Eggs might also be something you want to avoid if you’re pursuing a vegan lifestyle. So, it’s important to keep an eye on your almond milk and its ingredients, to make sure you’re not violating the rules of your diet unwittingly, or accidentally drinking something you’re allergic to.

This isn’t really related to almond milk specifically, either. Many, many foods include emulsifiers, and these are among the most common food additives in the world.

Are There Other Downsides to Almond Milk?

Almond milk does have a few other downsides, both in terms of your diet and your health.

For one thing, almond milk doesn’t have much protein in it. If you’re trying to get more protein in your diet – particularly if you’re vegan – you might want to use a milk replacement to get it. Whether you’re trying to add it to smoothies, drink it with a meal, or just use it as a base for a meal shake, you’re not getting protein from almond milk. Not really.

Almond milks may also include carrageenan. There’s growing evidence that carrageenan may be a carcinogen. There’s a lot of debate on both sides; this podcast goes into greater detail if you’re interested. That’s all assuming that the almond milk brand you get even uses carrageenan in the first place, which it might not.

Another drawback to using almond milk is the flavor. Specifically, in its natural state, it’s basically nut-flavored water. It’s not very thick, hearty, or rich. That’s why a lot of almond milks have added sweeteners. Those sweeteners, unlike emulsifiers, are more likely to hurt your diet. They can also affect your blood sugar, which can be important if you’re diabetic and need to watch your sugar levels. And, of course, the flavor of almonds doesn’t always go well with other ingredients, so it might not be the best base for your smoothie of choice. 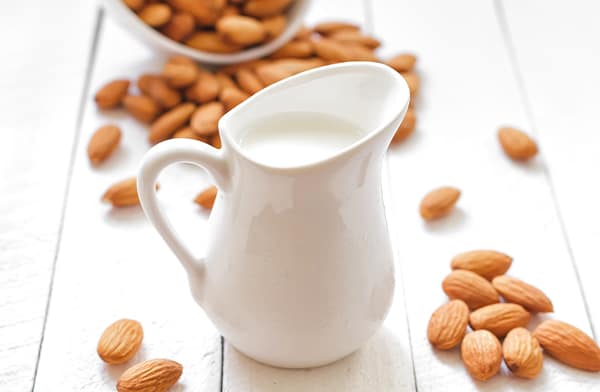 Finally, there’s the issue of sustainability. Almond farming is notorious for being terrible for the environment. At least part of the reason is because almond trees (which are a variety of rose, actually) are very water-intensive, but also require a lot of sunlight and warmth. It’s native to Iran, and is grown a lot in California.

Unfortunately, many of the companies growing almonds are doing so in a way that drains aquifers, which has had a detrimental impact on the environment in the surrounding area. One single almond takes roughly a gallon of water to produce. There’s growing awareness of the almond controversy, and a lot of people who care about sustainability in farming are protesting almond farms for this reason.

Of course, the sustainability of growing almonds has nothing to do with emulsifiers or with your diet, so that’s a concern you’ll need to navigate on your own.

Should You Be Concerned about Emulsified Almond Milk?

To be honest, emulsifiers are a relatively small concern in the grand scheme of things. There are a lot more important aspects of a diet to consider before getting into the nitty-gritty of additives in your food. Get your macronutrients in order first, for example. 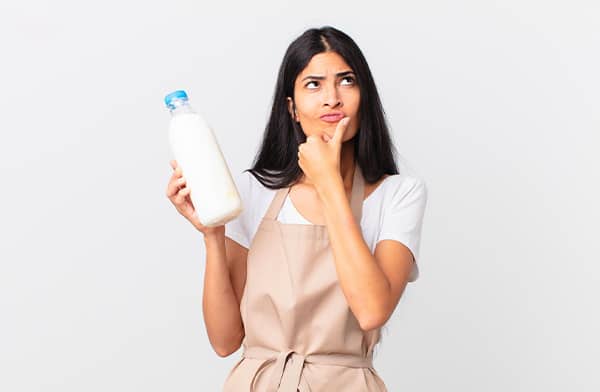 There’s not a lot of reason to be concerned about the emulsifiers in almond milk. However, if you are, you can also make almond milk on your own at home. All you really need to do is soak almonds in water overnight, then drain them, add fresh water and any flavorings you want, and blend them up. Strain the resulting liquid, and there you go: fresh, homemade almond milk. It will separate over time, but if you just shake it up, you’re good to go.

As an added bonus, this gives you a richer and more flavorful kind of almond milk. Many store-bought almond milks are relatively thin and have a low amount of almond in them; you will have a more concentrated milk when you make it yourself.

When it comes to your diet, I personally recommend the Smoothie Diet. It’s a great way to cut calories, get more macro and micronutrients, and control your cravings throughout the day. I don’t usually recommend almond milk in the recipes, though; many of them call for coconut milk or coconut water instead. Either way, you’re free to make your own decisions, choose the milk alternative you prefer, and adapt your diet to your needs.

Just don’t worry about emulsifiers until you’ve gotten everything else in order. It’s not worth the hassle for something so minor.

If you have any questions or concerns regarding emulsifiers or the Smoothie Diet after reading today’s post, please feel free to leave a comment down below or contact me! I’d be more than happy to answer all of your questions! 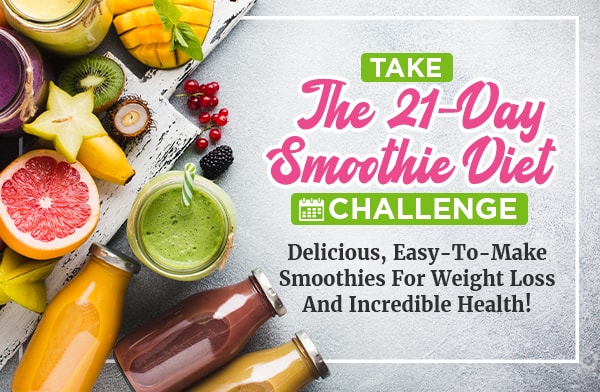 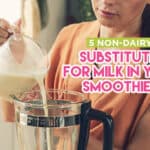 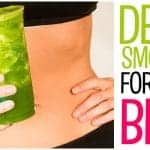 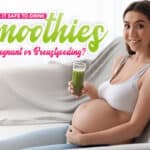 Is It Safe to Drink Smoothies While Pregnant or Breastfeeding? 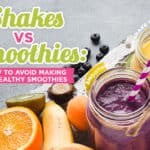