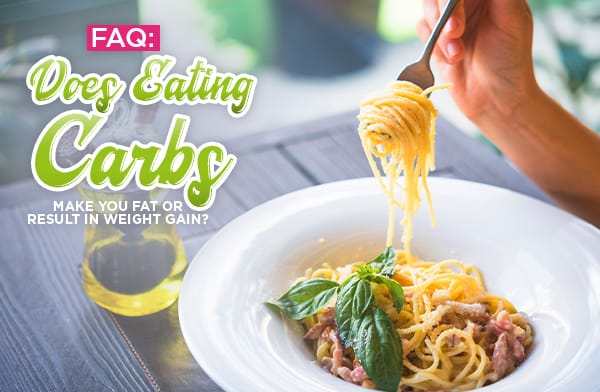 “Carbs make you fat.” At least, that’s what some people are saying, right? It’s why so many diets like Atkins or Keto are low-carb or no-carb diets. But is it true?

The truth is, you need balance in everything. Carbs aren’t bad for you – in fact, they’re one of the three crucial macronutrients your body needs to nourish itself (along with fats and proteins). Diets like Keto and Atkins cut out entire food groups, forcing you to eliminate unhealthy foods and snacks in the process, but they simply aren’t sustainable. After you inevitably start eating carbs again, you might even be more likely to overeat and regain weight.

Carbs aren’t the enemy here. There is a lot of misinformation out there, so I’ve put this FAQ together to help you get the real scoop.

Feel free to use the table of contents to skip to the section that best fits your question. We’ll be adding to this guide over time; if you don’t see your carb question here, please let us know in the comments, and we’ll add it to this list.

Question: What are Carbohydrates, Anyway?

Answer: Carbohydrates, or carbs, are one of three macronutrients, along with fats and proteins. They’re a core ingredient in nearly every food. When you break down food, you’ll find that it’s made up of some balance of carbs, proteins, and fats, along with micronutrients like vitamins and minerals. There’s a scientific description as well if you’re interested. 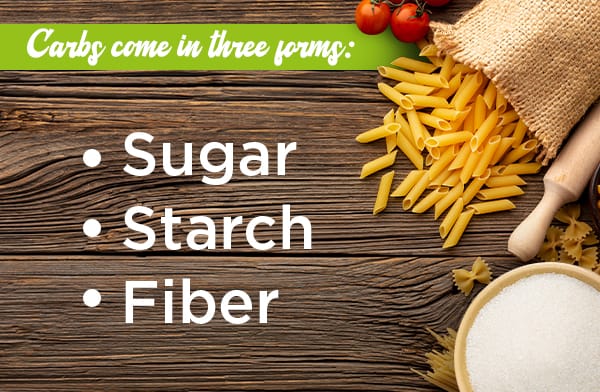 Carbs come in three forms: sugar, starch, and fiber. Your body needs all three of these to function correctly.

You can think of them in terms of how long it takes your body to digest them. Fibers take the longest but keep you feeling full and suppress your appetite for longer. Sugars are an immediate source of energy, which is why sugary foods give you that boost and the crash that comes after when the fuel runs out.

Question: What Purpose Do Carbs Serve?

Answer: Carbs are fuel! Sugars, specifically, are the best and most accessible source of energy for your brain and your body. If your body is given a choice, it will process sugar into glucose and absorb it into your blood, then shuttle it around to different parts of your body that need it. Starches and fibers are also made up of sugars but need to be broken down first, so they’re slower and less efficient forms of energy. 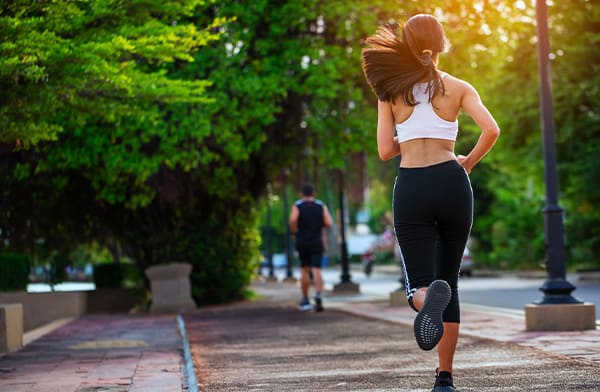 That’s not a bad thing! If you ate nothing but a bowl of sugar for breakfast, you’d be running out of energy in just a few hours, leaving you hungry before lunch. Fiber, in particular, helps keep you full and energized for longer.

Your body can use fats and proteins for energy, but they’re much less efficient than carbs. That’s how the Keto diet works, in fact: by removing carbs from your diet, you force your body to use fat and protein as fuel instead.

Question: Are There “Good” and “Bad” Carbs?

Answer: No! The only “bad” carbs are “too many” carbs. It doesn’t matter whether you get your carbs from a bottle of soda or a handful of berries: the difference is that the sugar in fruit is far outweighed by its nutritional benefits, whereas with soda or candy, there is no nutritional value. 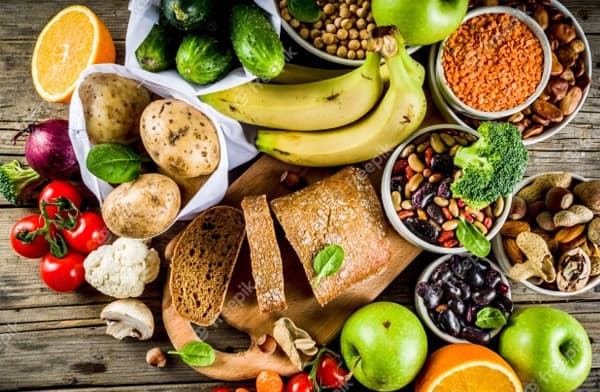 Processed foods often get a bad rap, and it’s entirely because of the added sugar. A bottle of soda is around 44 grams of sugar, while a cup of blueberries is only 12 grams. It’s much, much easier to eat far too much sugar when you’re eating processed foods rather than healthy, natural foods.

Natural foods like fruits and vegetables also tend to have a lot of their sugar bound up in fiber or starch, which is generally healthier for you than pure sugar.

Carbs themselves can’t really be good or bad since they’re all the same things. It just depends on how much you’re getting at any one time. It’s much, much easier to eat way too much sugar at once when you’re eating processed junk food than when you’re eating fruits and vegetables.

Question: Do Carbs Make You Fat?

Answer: Yes and no. When you eat carbs, your body breaks them down into sugars if they aren’t already sugars. Specifically, your body tries to convert them into glucose. Glucose is then converted into glycogen, which is used in other parts of the body, like your liver and your muscles.

When you have glycogen left over that your body isn’t using as fuel, it is converted into fat. That fat is stored throughout your body, to be used later as a fuel source when you don’t have fresh food on hand in your digestive system. 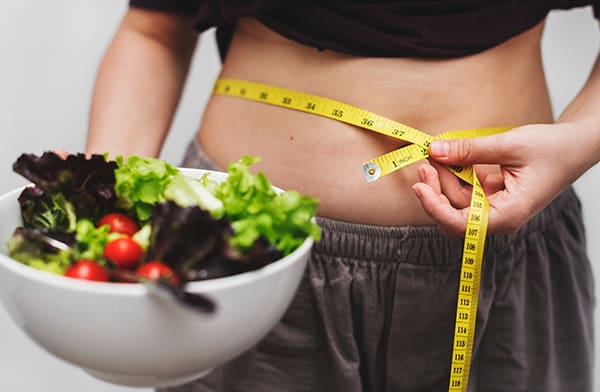 So, if you eat too many carbs, the excess is usually stored as fat for later. This leads to increased weight.

The trick is, this is constantly happening, even if you’re only eating a small number of carbs at a time. Your body is also constantly converting fat back into glycogen to use for energy. Both processes are happening virtually all the time, around the clock.

Carb-heavy foods tend to be the easiest to prepare and overeat, and they’re often the easiest and most tempting options at restaurants and grocery stores. It’s much easier to grab a bag of potato chips than it is to spend a few minutes preparing a healthy and nutritionally complete meal. Plus, the salt, artificial flavors, and sugar make these snacks addictive. The convenience and addictiveness of these foods are a bad combination for overeating.

Once again, it all comes back to balance. When you give your body too much sugar, it ends up converted into fat faster than it can be converted back into energy and used. You end up increasing the amount of fat you have stored, gaining weight.

So: yes, carbs can certainly make you fat, but not because they’re carbs, but because you’re eating too many of them. Processed foods are bad because they’re much higher in carbs than their natural alternatives, so it’s much easier to over-eat.

Question: I Heard Carbs Cause Diabetes; Is That True?

Answer: No, carbs won’t cause diabetes. Diabetes is a little complicated, so bear with me while I explain:

When your body uses sugar for fuel, it needs insulin to do it. Think of insulin as a “key” that unlocks a cell to give it fuel, sort of like taking off the gas cap on a car to add gas. If you’re overweight, your body sends a lot of messages to your hormonal system telling it to produce more insulin, to let it use the stored energy it has. Meanwhile, your cells don’t need the fuel, so it takes more and more insulin to get them to open up. This is called insulin resistance, and high levels of insulin resistance can cause diabetes. 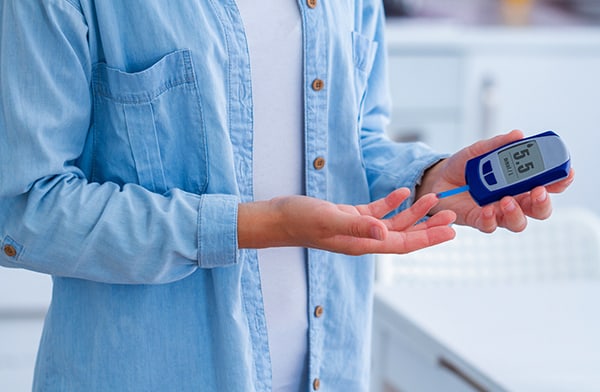 So: carbs on their own are fine. Too many carbs, too often, leads to storing excess fat. Excess stored fat can lead, eventually, to insulin resistance, which leads to diabetes. It takes years of sustained over-eating to reach that point.

Numerous studies over the years have proven this. In comparative studies between low-carb and high-carb diets, it was portion control (not carb control) that leads to weight loss. In other words, carbs themselves aren’t bad for you: too many carbs are.

Too much of anything is bad for you. Water is essential, but if you drink too much water in too short a time, you can die. It’s all about moderation and balance.

Question: I’ve Heard Fruits Are High in Carbs; Does That Make Them Bad for Me?

Answer: Not at all. Fruits are high in natural sugars and fibers; that much is true. “High” is relative, however. Above, I mentioned that a cup of blueberries has roughly 1/4th of the sugar as a bottle of soda. You can certainly over-eat fruits and get way too much sugar that way, but it’s going to be a lot harder than it is with more sugar-dense junk food.

Soda is also very simple in terms of what goes into it. It’s mostly water, sugary syrup, flavoring, and preservatives. Meanwhile, fruits have fibers, sugars, vitamins, minerals, and all manner of plant nutrients that are beneficial to your body. 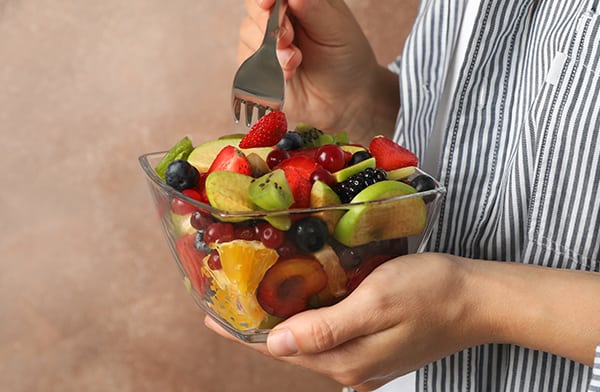 The same holds true for vegetables as well. Vegetables are also full of carbs (though usually more fiber than sugar), but they’re also packed with other nutrients your body needs.

Even if you’re on a low-carb diet, fruits aren’t bad for you.

This is backed up by science. While it’s logical to think that sugary or high-carb fruits can lead to weight gain, actual studies have shown exactly the opposite.

How do fruits help?

Fruit is good for you; there’s no way around it.

Question: Are Smoothies High in Carbs?

Answer: It depends on what you put in them. Smoothies that are made out of fresh fruits and vegetables will be lower in carbs than those that use processed fruit juice instead of ice or water. 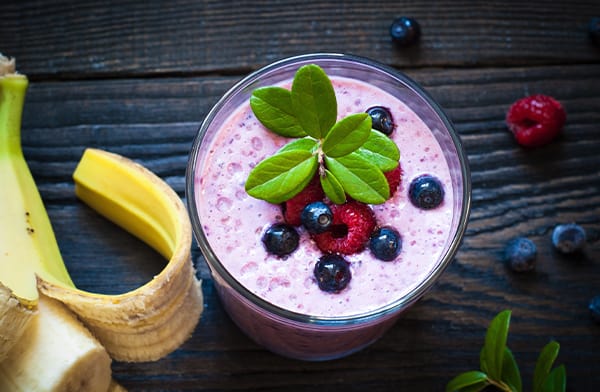 In the Smoothie Diet, all of my recipes make use of whole fruits but avoid fruit juice. This is because fruit juices – even the “healthy” juices you see with no sugar added – are very high in sugar.

You can see why I recommend recipes that use ice as a base instead of juice. Juice is just candy water; while it might have been made out of fruit in some distant part of the past, it’s loaded with sugars and has many of its beneficial nutrients (like fiber) removed.

The best smoothie recipes are not high in carbs.

Question: Can I Drink a Smoothie and Stay on My Low-Carb Diet?

Answer: Sure! Low-carb diets are all about reducing the overall balance of total carbs compared to fats and proteins in your diet. A smoothie contains carbs, so you need to calculate how many carbs (based on the fruits and other ingredients you’ve added to the smoothie) and figure out how much of your daily carb budget that uses up. 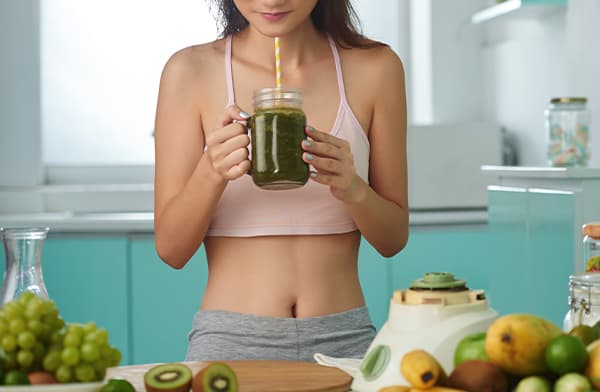 Some people, especially people on a Keto diet, might not have room for a smoothie. That’s okay; it’s your choice.

The truth is, studies have repeatedly shown that there’s very little difference between a normally-balanced diet and a low-carb diet in terms of weight loss. What matters is portion control. Drink smaller smoothies, or use smoothies to replace other meals. This is better than drinking them as a snack or beverage on the side of a meal.

Question: What Is the Best Thing I Can Do to Lose Weight? 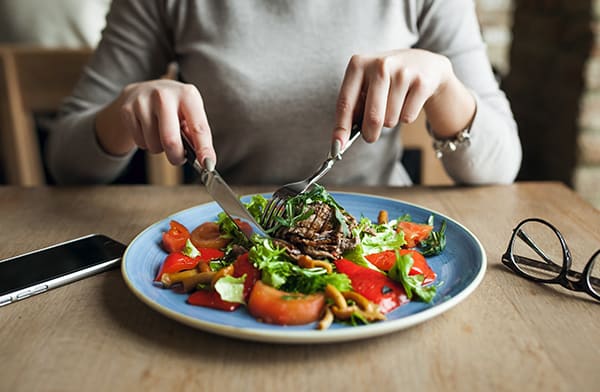 All you need to do is cut back on your calories and your portions. Carbs, like fats and like proteins, are not bad for you. Eating too many of them is bad for you.

My biggest recommendation is to cut out processed foods and replace them with more natural equivalents. Swap out processed bread for fresh, whole-grain bread. Replace fruit juice with fruit smoothies. Cut back on junk food and eat fruits, nuts, and vegetables instead. The key to it all is portion control.

Enjoy your fruit, even though it has carbs in it. The carbs aren’t bad for you. Maintain a balanced diet, consume reasonable portions, avoid high sugar juices, and monitor your calories. 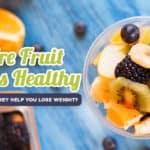 Are Fruit Cups Healthy and Can They Help You Lose Weight? 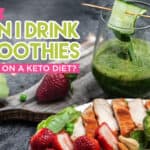 FAQ: Can I Drink Smoothies While on A Keto Diet? 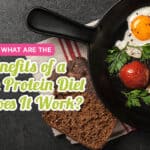 What Are the Benefits of a High Protein Diet and Does It Work? 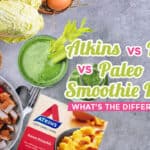 Atkins vs Keto vs Paleo vs Smoothie Diet: What’s The Difference?